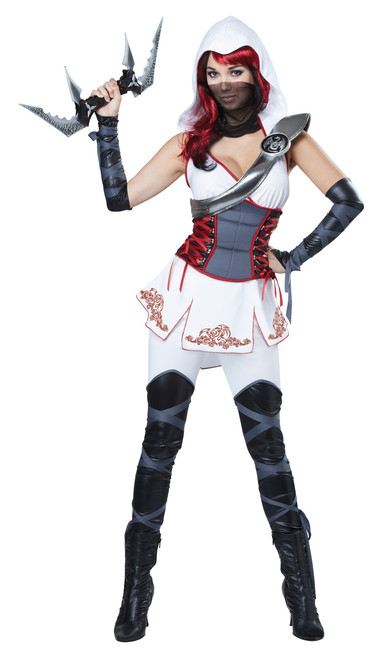 SKU:
036C302
UPC:
IN STOCK!:
Also available for in store pickup or curbside service during business hours
11am to 6pm - Monday to Saturday:
4307 Blackfoot Trail S.E.

*Note: Footwear and weapon accessory sold separately. Actual colour of leg and arm ties may differ from image on website and packaging.

In this costume, your victims may not even mind...

This white tunic top features an attached corset-style front in a black metallic fabric. It also includes a centre panel of black foam material as well. On the two side panels of the attached corset are silver eyelets which lace up with the included red ribbons. The attached corset on the Sexy Ninja Assassin Women's Costume is trimmed in a deep red colour, which matches the red ribbon that laces up the sides of it. Attached to the Sexy Ninja Assassin Costume's tunic is the hood which features a 'beak' that extends down from the centre. The front of the tunic's chest criss-cross and the entire tunic is trimmed with the same red seen around the corset. Red dragon outlines are featured on the bottom left, centre and right of the Sexy Ninja Assassin Costume. There are three different panels with slits cut between them which feature these dragon emblems. The entire hem of the tunic's bottom is stitched in red to keep the colour scheme going. With an elastic waist, these soft white pants cut at just above the knee with a grey trim that peaks up the centre of the thigh. From here down, the leg is a metallic black fabric. There are long strands of grey fabric for you to tie around this portion of the legs. A shining, silver foam piece of shoulder armour sits on the left - or right - shoulder and wraps across the chest and sits under the opposite arm. It fastens via a strip of Velcro. It also includes a silver and black medallion which features a silver dragon in the centre. This medallion can be pinned to the shoulder armour piece. Two fingerless arm gloves help to complete the Sexy Ninja Assassin Women's Costume. These long gloves cover the forearm and are made to match the bottom portion of the pants, which are the same black metallic fabric. Similar to the pants, the gloves feature long strands of grey fabric to wrap and tie around your arms. Lastly, there's a sheer face mask you can wear with the Sexy Ninja Assassin Women's Costume. Simply pull the sheer mask down over your head to cover the portion of your face you'd like to keep mysterious. It has an elastic strand in the back so it should stay up as it drapes down to cover your nose and mouth.

This entire costume gives off a sleek and sexy feel with a hint of an Assassin's Creed element. Pick up the Sexy Ninja Assassin Women's Costume for your next Halloween party!