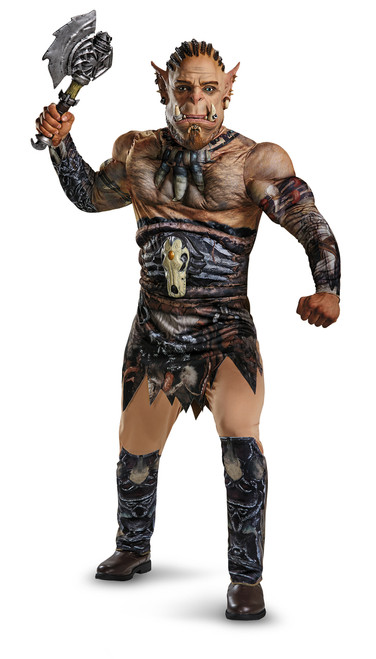 Help the humans of Stormwind in defeating Gul'dan as Durotan from the film Warcraft!

This officially licensed from the film, Warcraft, this Durotan jumpsuit is printed with his skin, hair, and clothing. This costume Velcros closed in the back with several strips. The poly-foam inserts pad the jumpsuit's chest and arms, while the rest of the jumpsuit sits close to the skin. There is a lot of detailing on this jumpsuit. His necklace around his neck. His armbands, chains and other arm adornments are also present on the jumpsuit. From the waist, an excess piece of soft and flexible fabric comes down and looks as though it is a warrior's loincloth, or skirt. Under that piece, the jumpsuit's legs come into focus. From the bottom of each leg up to the knee is print that gives the illusion of Durotan's footwear and leg adornments are there. On the front of the Durotan Warcraft Deluxe Muscle Chest Men's Costume are two strips of Velcro. In the centre of the stomach area, on the warrior skirt design, a plastic moulded skull with golden detailing on the top of the skull and dark headpieces around the sides and top of the skull attach. Durotan's face is captured in this really well-detailed latex mask. The latex mask covers the face and top of the head and extends back to cover the back of the head as well; leaving the neck exposed. Durotan's blue eyes can be seen, where there are cutouts for your eyes to see through. Holes at the nose and a slit in the mouth help with breathing and speaking. Everything from Durotan's braids to his tusks and various piercings are represented here!

This Warcraft-inspired costume is a great choice for any cosplay or Halloween party!