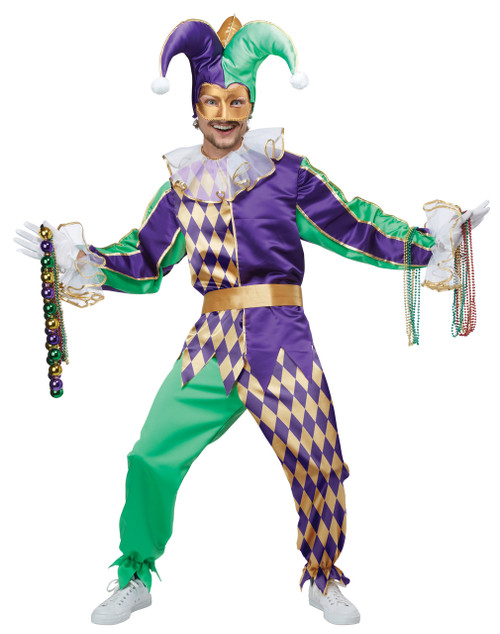 Get in the Fat Tuesday spirit in this colourful Mardi Gras Jester Men's Costume!

Made of a shiny fabric, this Mardi Gras Jester Men's costume brings all the fun and colour of the worldwide wherever you are. The shirt of the costume is the traditional Mardi Gras colours of green and purple with gold accents. The top is split into two, on the right side is a gold and purple diamond design, while the left side of the costume is purple. Both the sleeves of the costume are purple and green with a gold metallic detail splitting up each of the colours which runs up and down the length of them. The same gold metallic band goes down the centre of the shirt which splits up each colour and design and also runs along the top of the shoulders. The back of the costume features a Velcro strip that fastens each side. The bottom of the Mardi Gras Jester Men's costume shirt has a triangular design to the hem and hangs longer on the torso. At the end of the sleeves are two attached cuffs. These cuffs are a white crinoline-like fabric trimmed with gold metallic fabric. The Mardi Gras Jester Men's pants are an elastic waisted pants made of the same fabric as the shirt. The colours and designs are opposite on the pants as they are on the shirt. The bottom of each pant leg also features the triangular cutout hem similar to the bottom of the Jester's shirt. The included Jester's hat comes in the traditional three-point style and includes soft, white pom poms at the end of each point. Each of the Jester's hat points is done in a different colour and/or design. One is purple, one is green and the third is the same purple and gold diamond pattern found on the shirt and pants. Each one of these portions of the hat is also trimmed with a line of gold metallic fabric on the top. The beautiful eye mask included with the Mardi Gras Jester Men's costume is done in a gold colour with matching gold loop around the outside edge. A white elastic strap wraps around the head and fastens with Velcro. Matching the cuffs of the sleeves, a white crinoline-like collar is also included with the costume. Trimmed with gold metallic material along the bottom and top, the top of the collar has extra for you to tie behind the neck. Lastly, a gold belt sash wraps around the waist and Velcros in the back and completes the look.

This Mardi Gras Jester Men's costume will have you actin' a fool! Perfect for Halloween or a Mardi Gras event near you!