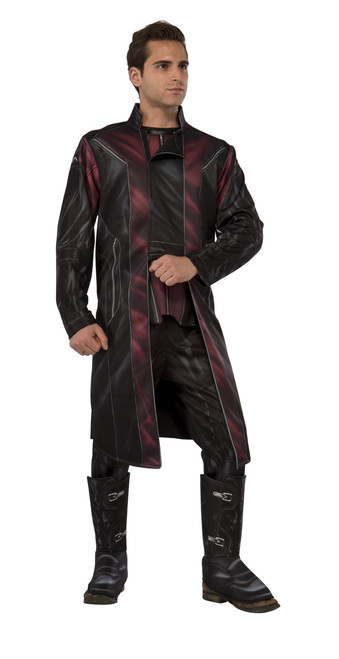 One of the more quiet and loner type guys in the Avengers, Clint Barton known as Hawkeye, plays a more intrical part of defeat Ultron in this officially licensed costume from the movie Avengers Age of Ultron.

This great Hawkeye costume comes with two pieces, specially printed and designed to look like the costume he wears in the movie. The longer style jacket has the appearance in red and black of his leather pieces. The front looks like it has several zippered pockets and pieces. The jacket has a collar and a front piece panel that velcros, closing the jacket should you choose to do so. Attached underneath is a shirt front that also gives the appearance of what he normally wears underneath, a zip up, zipped pockets and such. The matching black 'leather' pants have an elastic waist and a poly foam belt attached to the front. There is also attached poly foam boot covers that slip easily over your shoes and give the costume a little extra definition.

Give Hawkeye a hand in defeating the nefarious Ultron. Pair this costume with the other Avengers or Black Widow for a great couples or group costume this Halloween. All you need to do is add his bow and arrow or his acher glove (look for both on our website) for a fun costume for comic con, cosplay or hanging out with the guys.