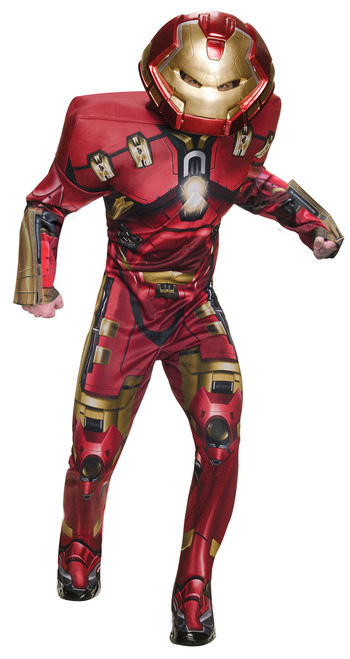 Made in case Bruce Banner loses control of his alter-ego, the Hulk, this 44th Iron Man suit is known as The Mark XLIV Armour or the Hulkbuster! Tony Stark breaks this baby out in the epic duel of Johannesburg when the Hulk is out of control. This is the officially licensed Hulkbuster Iron Man costume from Avengers Age of Ultron.

This oversize Iron Man costume will give you the bulk you need to become the Hulkbuster. The one piece jumpsuit has a Velcro back. The chest is made with a poly-foam material which is over-sized to give you the appearance of the larger Hulkbuster. The costume is also sublimated or specially printed to make the amour look like Tony Stark's in the movie. The sleeves have a poly-foam gauntlet and the boot covers are also made with the same material to give this costume a more 3D effect. Attached is a hood over which you can wear the hard plastic Hulkbuster mask which has an elongated face and an elastic in the back to keep it on the face.

Johannesburg will never be the same after the Hulkbuster and the Hulk came to town. Play around with Iron Man, the Hulk and the other Avengers for a fun group costume this Halloween! Or add a pair of gloves for a little extra warmth. Great for comic con, dressing up and have a bunch of fun.