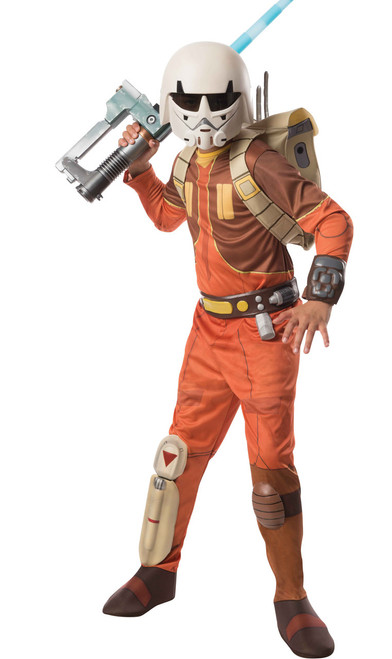 This is the officially licensed Ezra Bridger costume from the fun, new animated series, Star Wars Rebels. Ezra Bridger is the feature Rebel character from Lothal, a planet taken over by the Empire.

The Ezra costume includes a well detailed, full body jumpsuit with attached moulded armour pieces and attached boot tops. It also has a molded foam belt, made to look like its holding all of his little gadgets. It ties around your waist with sash ties. A functioning backpack, and a Stormtrooper 1/2 mask are also included. The back pack is printed to look just like the one he uses in Star Wars Rebels. He only wears the mask briefly in the show, so it's not necessary to wear it all of the time, and it fits into the back pack.

Learn the ways of The Force and fight the Empire, or wear it for Halloween, play time, or a Star Wars themed party. Pairs best with other Star Wars Rebels costumes like Sabine Wren!