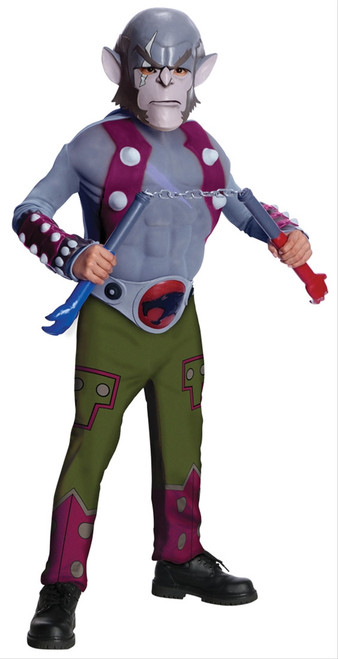 This is an officially licensed Panthro costume. This is a newly design look for the classic character, part of the recent reboot of the series. This is a three-piece costume with a jumpsuit, mask and belt. The jumpsuit opens up from the back of the neckline with Velcro. The long sleeves have attached moulded foam gauntlets with raised spike designs. The torso is a moulded muscle chest with a scar design and suspenders with more raised spikes. The pants of the suit are green with Panthros shin guard armour printed on. The belt is soft moulded plastic with the Eye of Thundera emblem and it ties up around the waist. The mask is stiff moulded plastic of Panthros face. It has eye holes, nose holes, and a mouth hole. It has elastic that fastens around the head. This costume would be a great part of a ThuderCats group costume, for a comic book convention, or Halloween.

Pennywise from It Movie Costume