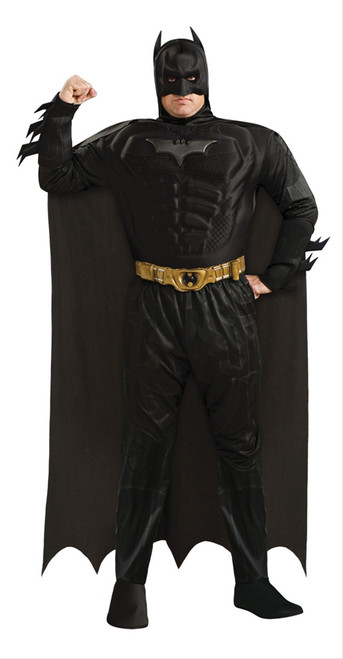 This is a plus size Batman men's costume from The Dark Knight Rises movie. Great Halloween costume or super hero costume for men.

This is a four-piece black Batman costume with a muscle top with chest plate, pants with boot covers, belt and Batman mask with attached super hero cape. The top is a long-sleeved stretchy fabric that opens up in the back and fastens closed with Velcro. There are padded shoulders meant to look like muscle and foam Batman fins along the forearms. The muscle chest plate is stiff moulded foam with the Batman emblem included. The pants have an elasticized waist and attached boot covers. The foot covers have foam lining and elastic bands that wrap around the foot and fasten close with Velcro. The mask is Batmans half-mask made of moulded foam with foam-lined bat ears. The attached black super hero cape fastens around the neck with Velcro and reaches to about mid-calf. The Batman super hero utility belt is moulded plastic that ties around the waist.

This famous Superhero costume can be worn for Halloween, a super heroes costume party, or a comic expo. Didn't you want to be Batman as a kid? Now is your time to take on this classic super hero, be Batman for Halloween.