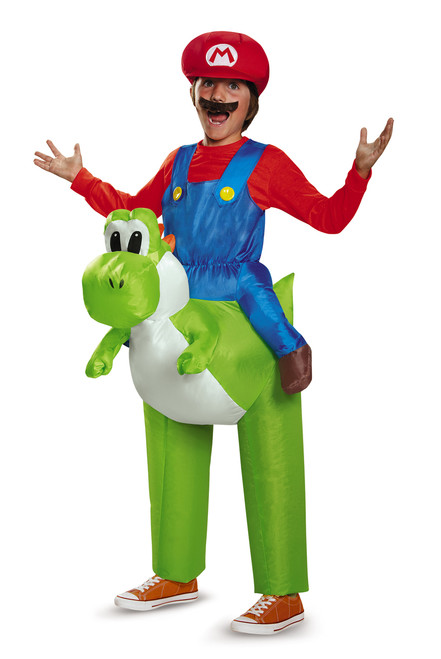 SKU:
368D684
UPC:
IN STOCK!:
Also available for in store pickup or curbside service during business hours
11am to 6pm - Monday to Saturday:
4307 Blackfoot Trail S.E.

*Note: Red shirt, hat and moustache are not included.

Take your best friend with you wherever you go with Nintendo's Mario Riding Yoshi inflatable children's costume!

This hilarious inflatable costume licensed by Nintendo features video game pals Mario and Yoshi as one costume. The jumpsuit's main component is Yoshi the dinosaur. Your legs become his once you slip into the jumpsuit. The included fan inflates and the top half of the costume is Mario, which you appear to be. Tiny legs hang off the sides of the costume as they look like your's. The classic blue overalls come up over your shoulders. Sleeves, ankles of the pants are elastic so they create the perfect seal to keep in the air to help inflate. The waist also cinches to prevent any air from escaping. The material of the Mario Riding Yoshi costume is pretty durable and holds up well, but we suggest not being too rough with it.

Grab your Mario cap, moustache and a red shirt and hit the Super Mario World scene or Halloween party for some fun and laughs!