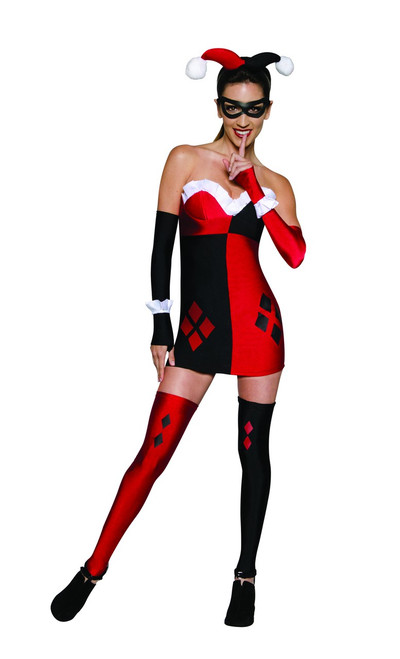 Inspired by Harley Quinn's original one-piece jester's outfit, this sexy take changes things up but keeps the overall theme. Harley's classic black and red diamond design is reflected in this one-piece dress. The dress is a soft material that does have some stretch to it. The cups of the top of the dress are black and red to match the other aspects of the dress. They are also trimmed with white ruffled detailing. The clear straps hold this dress up on your shoulders. Each coloured panel in the front has the opposite colours in the shapes of four diamonds which actually make up a diamond shape as a whole. The thigh highs are one black, one red. They fit over the lower part of the leg and the stirrup at the bottom of each keeps them secured to the bottom of your feet. Two diamonds sit on the front of the thigh highs in the opposing colour. The Glovettes are similar. They fit over your arms and your hands remains uncovered. Harley's glovettes also feature a white ruffled trim between the wrist and elbow. The Jester headband is black plastic and features the black and red portions of a jester's hat, complete with a white pompom at the end. Finally, the black eye mask is a traditional mask that covers the eye areas and has an elastic strap that connects via Velcro.

Head to your next Halloween Party or Cosplay event in a comedic style in this Harley Quinn DC Super Villains costume!