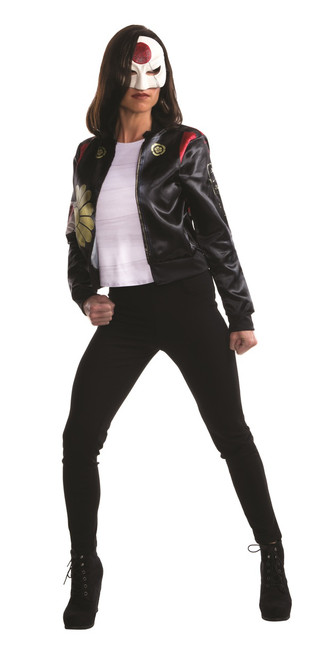 Highly skilled in martial arts and swordsmanship, Katana is a lethal character in her own rite! Officially licensed by DC Comics, this Katana Ladies costume come right from the film, Suicide Squad.

The ladies Katana kit includes a black jacket in a shiny, satin-like material. This bomber style jacket features an open design with faux zipper detailing printed on the front of the fabric. Multiple yellow floral designs also appear on the Katana jacket. There is a white arm band on the right sleeve which features the flag of Japan with some Japanese characters as well. Bands of red go up and down the left and right side of the jacket. The left sleeve features some faint red and yellow Japanese characters as well. The jacket's back is where you will find the red bands from the front of the jacket coming to the centre and sides to meet in the middle and form a large bow and knot. More yellow and red floral patterns can be seen on the back in a worn-out effect. Along the top of the jacket's back, are white Japanese letter characters. The attached shirt front is a white panel of fabric, designed to look as though a shirt is worn underneath the jacket. There are lines of "dirt" on the costume to give the illusion it has seen some battles. The included Katana character mask covers the top portion of the face including the eyes - with cutouts for vision. It is white and features a red circle in the centre resembling the flag of Japan. There are wear marks on the mask and, even though it is made of a moulded plastic, the texture has a leather-like look to it. A black elastic strap Velcros in back behind the head.