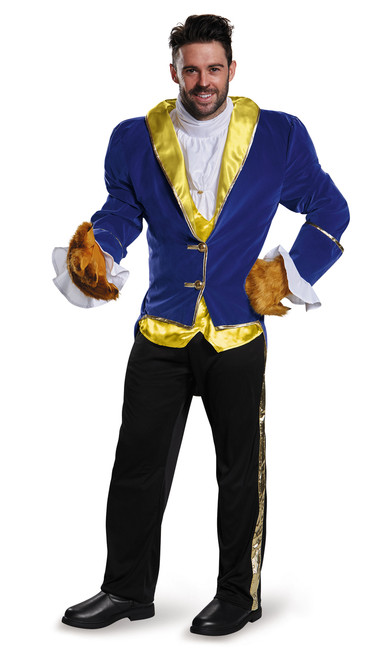 Tale as old as time... What Beauty can be without her Beast? This classic Beast costume is inspired by the character from Disney's animated film, Beauty and the Beast.

The officially licensed costume comes with a jacket that is a cobalt blue shade and is made of a soft, velvet-like material. Beast's jacket lapel is golden yellow and matches Belle's dress. The jacket is also trimmed with gold accents and the two jacket buttons are also golden in colour. This jacket has tails, just like Beast's jacket from the film and the jacket cuffs reveal white cuffs. The pants are a classic black pant with the same gold detailing in a thick strip up the outside of each leg. They are elastic at the waist so they are easy to put on and take off. The included dickie is white and would be put on before the jacket with attached vest. Of course, also included with the Beast Costume would be a pair of soft and furry brown Beast gloves. They are so plush and soft and feature felt 'claws' at the end of each finger.

There's something there that wasn't there before when you put on this amazing Beast Men's Beauty and the Beast Costume. Pair it with Belle for a magical evening! Great for Halloween, as a cosplay or a couples costume!

Beauty is a Beast: My Hairy Princess Belle Costume

The Beast Beauty And The Beast Infant Costume

Beauty is a Beast: My Hairy Princess Belle Costume