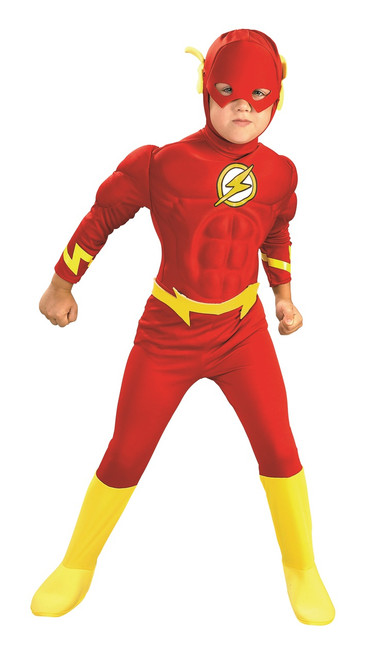 SKU:
378S308
UPC:
IN STOCK!:
Also available for in store pickup or curbside service during business hours
11am to 6pm - Monday to Saturday:
4307 Blackfoot Trail S.E.

Super-Speed is the name of the game when your kids want to be The Flash! This is an officially licensed costume from DC Comics.

The kids Flash costume comes with a red, one piece jumpsuit with velcro in the back. The jumpsuit has a poly-form, formed muscle chest to give instant buff. Printed on the chest is the round Flash symbol. The sleeves feature lightening bolts around the cuffs. Attached to the costume is yellow boot tops, which go over shoes or feet. A poly-foam lightening bolt ties around the waist. The mask is a full mask that velcros under the chin. It has a light poly-foam eye piece and two lightening bolts coming out of each side of the head.

Solve crimes in super-speed with this fun Flash costume. Wear for Halloween, dress up, school and a fun group costume with other DC Comics characters such as Batman, Superman and Green Lantern.