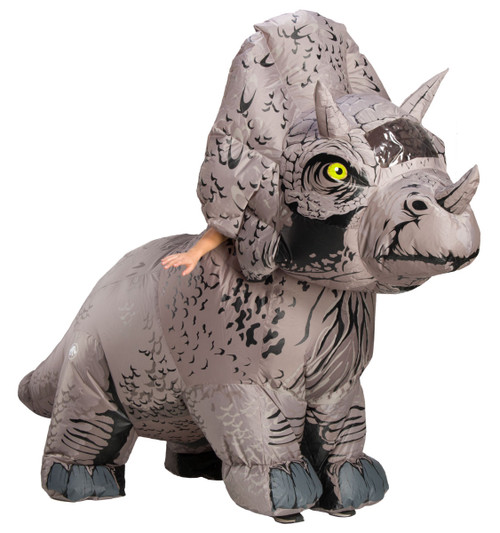 The universally familiar Triceratops doesn’t get near as much love as the Tyrannosaurus Rex, but for many this is their favorite dinosaur, ever. Now it exists as a Halloween costume for those who have felt left out, who can now dress up as the remarkable herbivore with three fearsome horns.

The inflatable costume self-inflates with 2 battery operated fans, expanding the costume into an enormous 10 foot plus length. The wearer’s feet fit through the costume’s front feet, the cuffs of which are elasticized to retain the air inside. The back legs of the costume then follow the wearer around, floating fairly lightly as the wearer moves. A large clear panel allows the wearer to see clearly out the front.

Sure to be a super-awesome costume for any event, particularly one where the wearer has plenty of room to move around, such as a fan expo or other cosplaying get-together. Not a good choice for a small, tight house where a private Halloween party takes place. Sure to make hundreds of small children explode with joy on first sight.