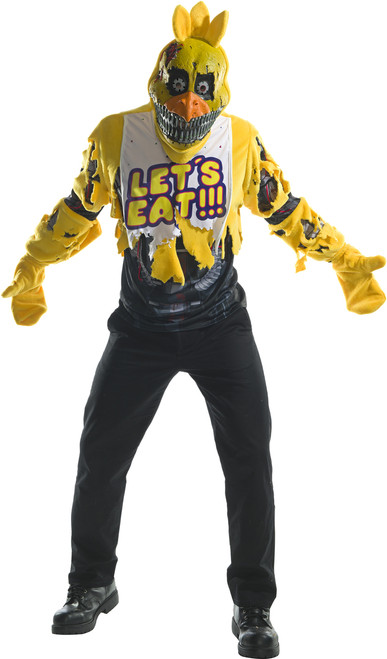 Chica may sound like an adorably cute name, but things aren’t often as they appear to be. With the Nightmare at Freddy’s Chica Costume prepare to break the stereotype and plant seeds of fear in those around you. Underneath all that yellow are sharp teeth and claws after all.

The Men’s Chica Costume top is covered in majority by a yellow felt-like material, and features an attached bib with the words ‘Let’s Eat!!!’ printed across the front.  Starting from below the shoulders the yellow material begins to appear deteriorated and shredded, allowing for holes that view through to an attached undershirt. This attached undershirt has printed designs across it creating the images of the inner machinery of an animatronic. A pair of yellow mitts slip over the hands and are designed to help blend both pieces of the costume together. As a final completing piece to the costume there is a partially molded mask with matching yellow fabric can be slipped over the head. It has three yellow fabric feathers sticking up from the top of the head, and the molded portion of the face is painted to correspond with Chica’s colors as well is the inner machinery.

The Mens Chica Costume would make a great surprise for the Nightmare at Freddy’s fan in your life, or wear out on Halloween to spook passersby. Take a look at the other FNAF costumes and piece together your own haunting crew of animatronics for your big night out.