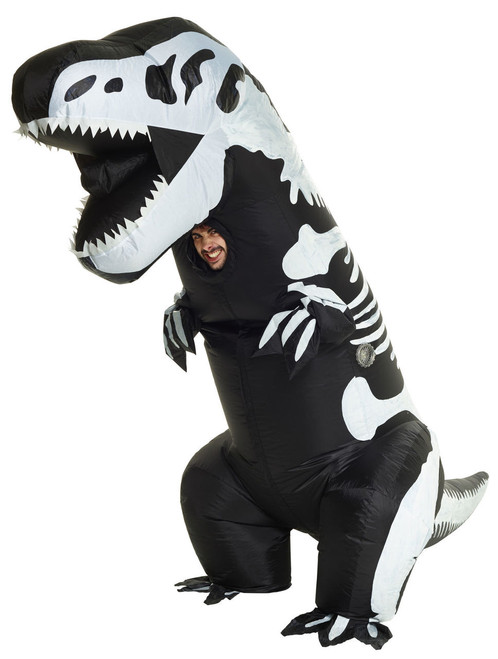 SKU:
253O541
UPC:
IN STOCK!:
Also available for in store pickup or curbside service during business hours
11am to 6pm - Monday to Saturday:
4307 Blackfoot Trail S.E.

Get ready to go viral in this Giant T-Rex Skeleton inflatable costume. What can't a T-Rex do? Nothing! Especially one that's been dead for millions of years. So, get ready to impress and terrorize with his teeny little skeleton arms, because this guy is up for the challenge!

This huge inflatable T-Rex Skeleton costume is made out of a strong nylon fabric used for various inflatable products. The face hole is located in the neck of the costume and has a secure elasticized opening to prevent air loss. The costume fills with air via a fan that is attached to the side of the costume near your waist region. The fan is plugged into a battery pack with a belt clip that can be worn on pants, pocket or a belt.

You can literally wear this fun costume for a variety of purposes including hilarious YouTube videos, epic office pranks, terrorizing the neighborhood on Halloween, or even a Jurassic Park themed party. It's time to rule the world again!