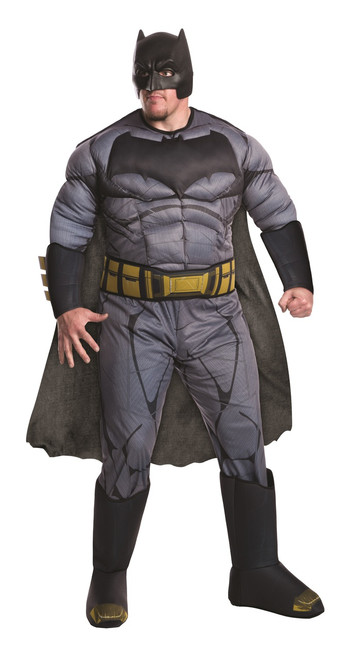 SKU:
270SX95
UPC:
IN STOCK!:
Also available for in store pickup or curbside service during business hours
11am to 6pm - Monday to Saturday:
4307 Blackfoot Trail S.E.

Part of the Batman vs Superman Dawn of Justice collection.

Enjoy the Halloween season as Ben Affleck's officially licensed Batman from the DC Comics film, Batman V Superman: Dawn of Justice. This three-piece costume includes a padded shirt complete with muscles. Made of a soft, grey fabric, this shirt includes a large black Batman symbol on the centre of the muscular chest. There is also some black lines and other detailing done in black on the shirt. The arms, chest and abdomen are each padded to give the illusion of a beefed up Batman. The open back fastens with several strips of Velcro and would be hidden under the long, black Batman cape. This cape is detachable if you want it to come off. It simply attaches to the shoulders of the padded Batman shirt with Velcro. At the base of the Batman shirt is a printed yellow Batman utility belt. On the end of the sleeves of the padded Batman muscle shirt are the 3-D printed gauntlets. These gauntlets are made of a flexible black poly-foam and include yellow Batman "spikes" you always see on Batman's gloves and gauntlets. The pants of the Deluxe Muscle Batman DOJ Men's Plus costume include an elastic waist. They are a thin, soft and flexible fabric and include the same grey and black pattern as the shirt. Attached at the bottom of the pant legs is where you'll find the 3-D printed boot covers. Flexible and black, these poly-foam boot covers slide over your shoes and feature a couple areas of yellow on the toes and sides. A black elastic strap Velcros under the foot to help keep them in place. To hide your identity, the Deluxe Muscle Batman DOJ Men's Plus costume includes a vinyl face mask. A black elastic strap wraps around the back of the head and Velcros together. The bottom of the face is exposed so speaking and breathing isn't a concern. The eyes are cutout and there are smaller Batman ears on top of the face mask since this is the Ben Affleck version. The worn look of the Batman face mask adds a layer of texture to it as well.

This Deluxe Muscle Batman DOJ Men's Plus costume is great for anyone looking to share their love of Batman at any Halloween party or entertainment expo!