In Spider-Man: Homecoming there was a widely-seen clip of Peter Parker confronting a group of criminals who have used masks of The Avengers to hide their faces. Some of the die-hard Spidy fans out there might know that this was originally a scene from the comic books! In an issue of Ultimate Spider-Man, Peter Parker encounters robbers in an almost identical scenario (though without the Batman mask!) Like most Marvel ventures, the story is filled with small Easter eggs and hidden references! 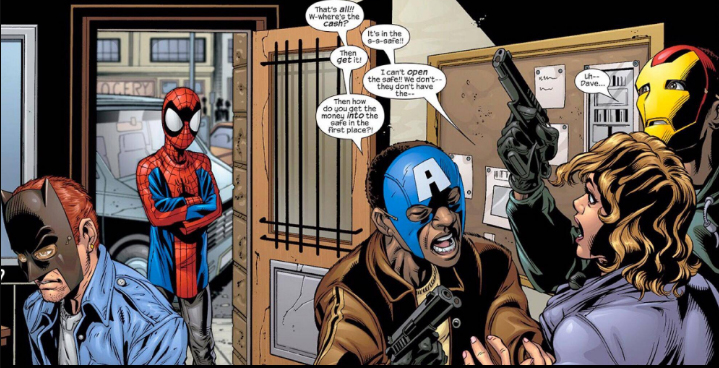 These masks have made cameo's all around the world in many areas of popular culture! From movies, to comic books, and more. And to top it all off, the characters from The Avengers movies have become a global phenomenon! With vintage roots it’s hard not to be drawn to the simply molded mask pieces, all thanks to the company Ben Cooper!

The company Ben Cooper, Inc. was founded in 1937 and quickly became an iconic American symbol of Halloween with its peak popularity being in between the 50s and the 70s! The Ben Cooper Masks were widely known, and their other character ensembles and products made them one of the largest costume manufacturers in the United States! They were often one of the first companies to purchase licenses for relatively unknown characters, such as Spider-Man at the time.

Here at The Costume Shoppe we wanted to spread the word about these iconic character masks and their fun cameo! We have four styles in stock to choose from, allowing you to decide what character to embody.

Thor is the God of Thunder and a beloved super hero, carrying his iconic hammer and brandishing lightening from his fingertips! With this mask you will have his helmet and original styled eyebrows and hair?

With a classic Hulk mask, you will become Bruce Banners stronger, angrier, half. Bare your teeth and take on villains and monsters alike with your intimidating size and big green muscles! Nobody will like you when you’re angry.

Tony Stark is a powerful billionaire and a popular superhero without a disguise as Iron Man. With a strong mechanical suit and a genius brain there isn’t many problems that you can’t solve. Red and gold is definitely your colors!

Captain America, also known as Steve Rogers, is the patriotic hero that everyone loves. With this iconic blue mask, and a large ‘A’ emblem on the forehead, the mask completes his original appearance. You may be old but you’re still strong!

Take your passion for Marvel farther and add to your ever growing collection with there fun historical pieces!