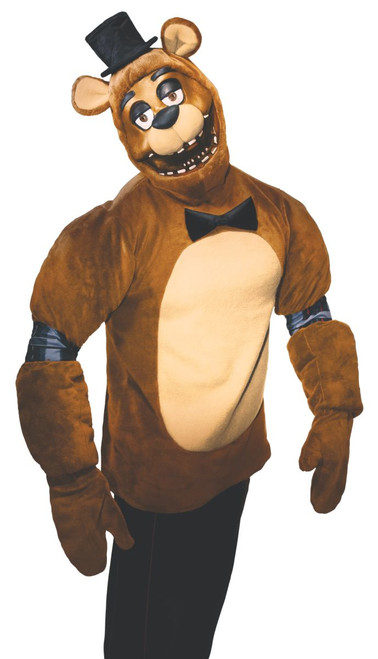 If Freddy has his way, everyone would be Freddy. Whether they want to be or not. Get ready to get stuffed into a Freddy Fazbear suit … but whether this is the beginning of the end or you’re Freddy himself, you’re going to have an amazing time once you’ve gotten yourself ready.

The fleece top is incredibly soft to the touch, with large plush shoulders and Freddy’s yellow chest and black bow-tie. The sleeves below the elbows are plaid cloth, so that the large padded mittens will wear comfortably over-top. The plush head, featuring a fuzzy frame surrounding a detailed mask depicting Freddy’s simple, disturbing face, complete with uneven teeth.

Wear the ensemble to ready yourself for any Five Nights at Freddy’s event, game con or possibly if you want to be the lead singer at a Karaoke bar. Beware of the costume’s effects after closing time.